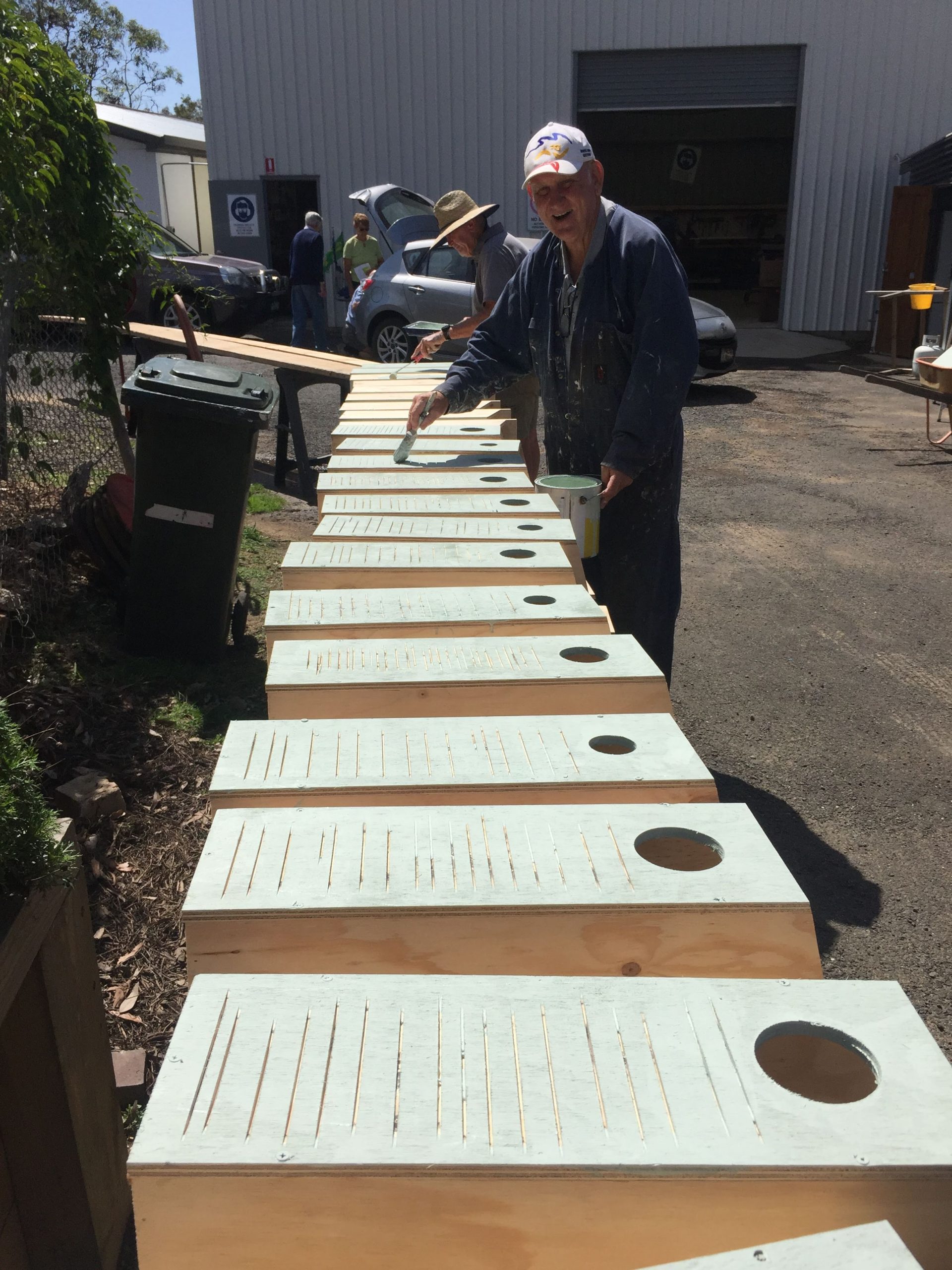 The Narooma Men’s Shed is open and would like to assist those directly affected by bushfires in the community, by fixing, repairing or making items to help them in getting back on their feet.

We have skills and machines in both metal work (welding, bending sheet) as well as wood working capability.

So, if anybody in the wider Narooma area who has a need that we can tackle at the Shed during the ongoing bushfire crisis, bring your items to the Narooma Men’s Shed in Glasshouse Rocks Road and we will do our best to fix things.

Or ask for Dave or Dick at the Shed 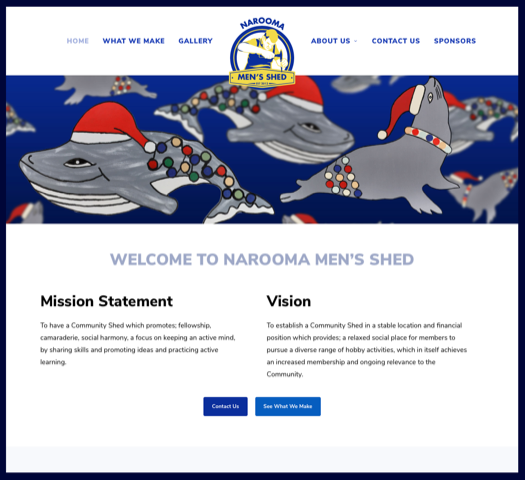 Our new website (www.naroomamensshed.com.au) is now up and running thanks to the time and effort that Sarah and Adrian from Fisse Design have donated as a community project to the Narooma Men’s Shed. 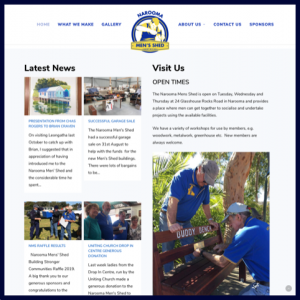 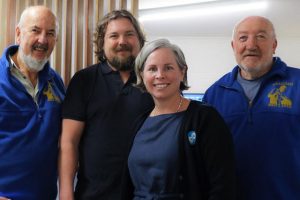 The site is now a great asset to the Men’s Shed, and will let all the members and the wider community know what is happening on a daily basis at the shed. 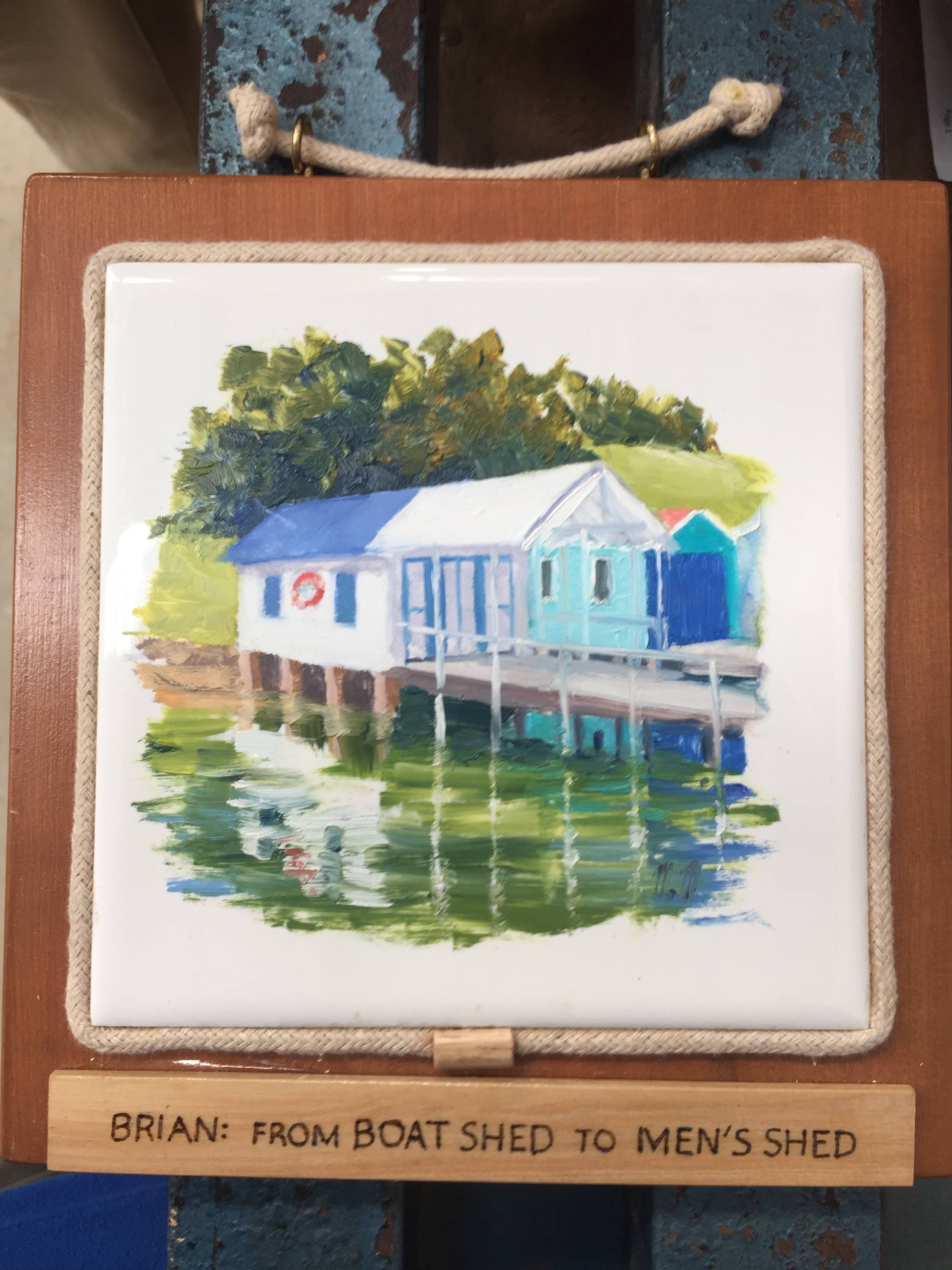 On visiting Leongatha last October to catch up with Brian, I suggested that in appreciation of having introduced me to the Narooma Men’ Shed and the considerable time he spent in guiding me to learn the process of woodturning, that I would endeavour to make up a memento so as  to recall his time in Narooma.

Quite some time has passed but after some input from a number of Shedders, and the support for the “MACS girls” we finally have an item to forward on.

I initially tried to find a white round tile to use to recess into a rounded timber base. No luck, but it was then that the “MACS girls” offered a square tile.

Similarly I procrastinated on what type of motif to use that might strike a chord with Brian – Lighthouse, Whale, Montague Island, etc.

I won’t try to cover all that have contributed to the discussion but I am indebted to Rob Atkinson who provided me with a bit of Craven family folklore. That on relocating to

Narooma, Brian’s first Priority was to purchase a boat shed before considering a new home for the family.  A reminder  wife Elizabeth has ofte 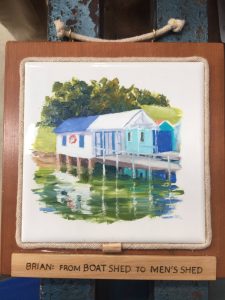 n made over time.

So Rob came up with the perfect motif as you can see from the present. I had previously spoken to Bernie Perrett to use his painting skills but when finally ready Bernie was travelling and Margaret Moran came forward to complete the task – a fie result of her excellent talent.

Peter (Cutly) Carles located a piece of Bunya Pine that Brian had left with NMS and produced the caption at the base of the plaque.

So a big thank you to the “MACS girls” for the tiles, tyo Jennifer Hawkins for her guiding on trimmings, and to Margaret Moran for her excellent artistry.

I would like the group support to enable us to send off the plaque, a “thinking of you card” card, a current membership list – which has increased, as well as a copy of the plan for the new shed development, plus a photo of Rob Atkinson and Bernie Perrett as ab NSM effort.

This I hope will update Brian as to the further growth of the Narooma Men’s Shed in the past year. Brian, as an instigator back in 2011 and on formation became the first president along with Rob Atkinson as the first secretary and still mush a contributor today. 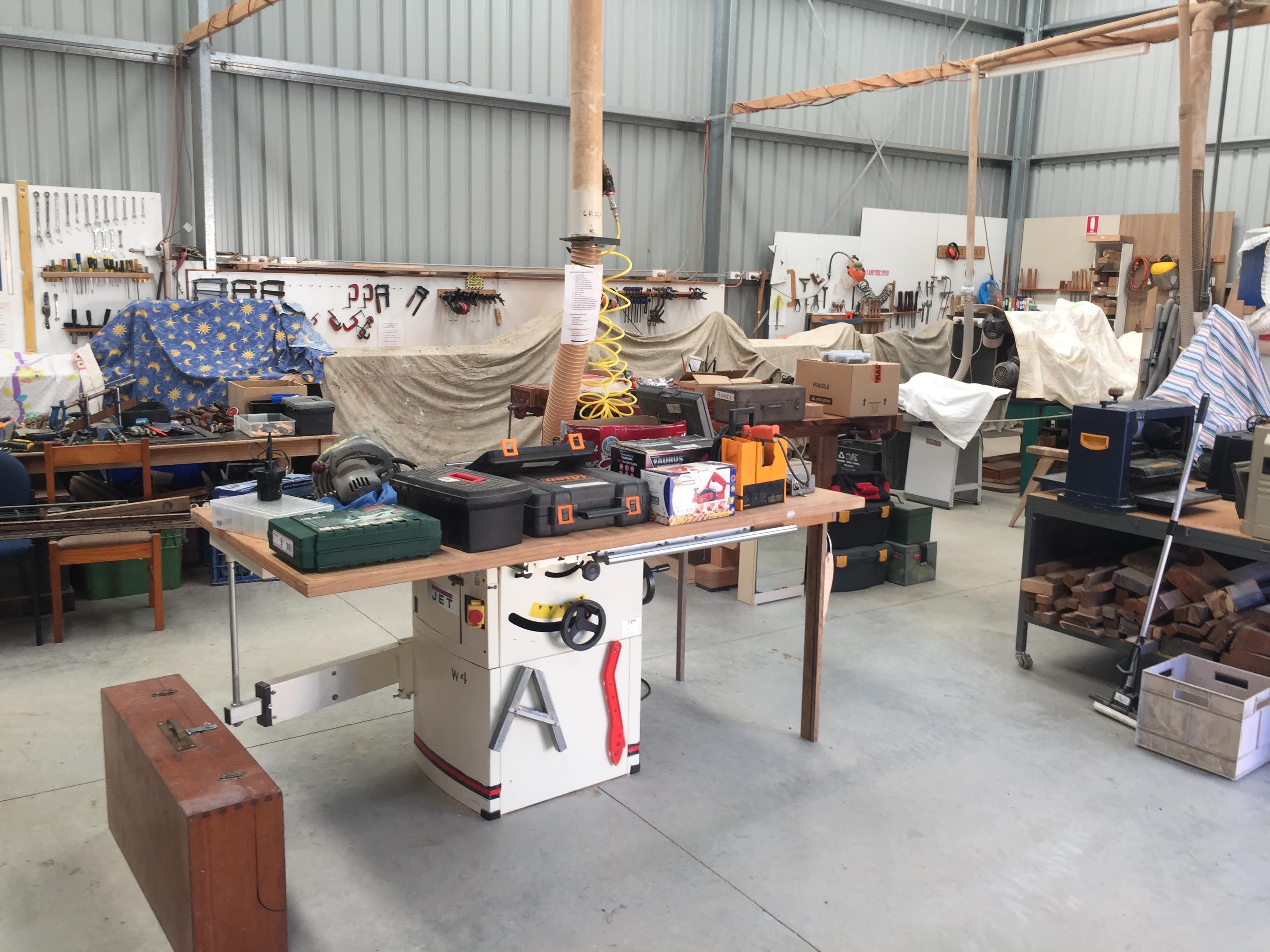 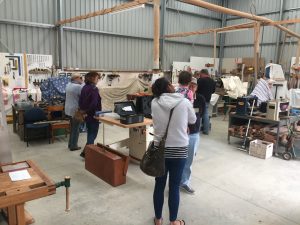 The Narooma Men’s Shed had a successful garage sale on 31st August to help with the funds  for the new Men’s Shed buildings.

There were lots of bargains to be had and a lot of satisfied customers. 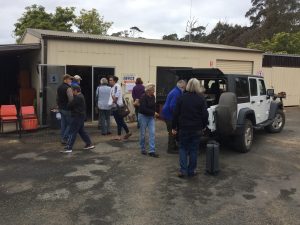 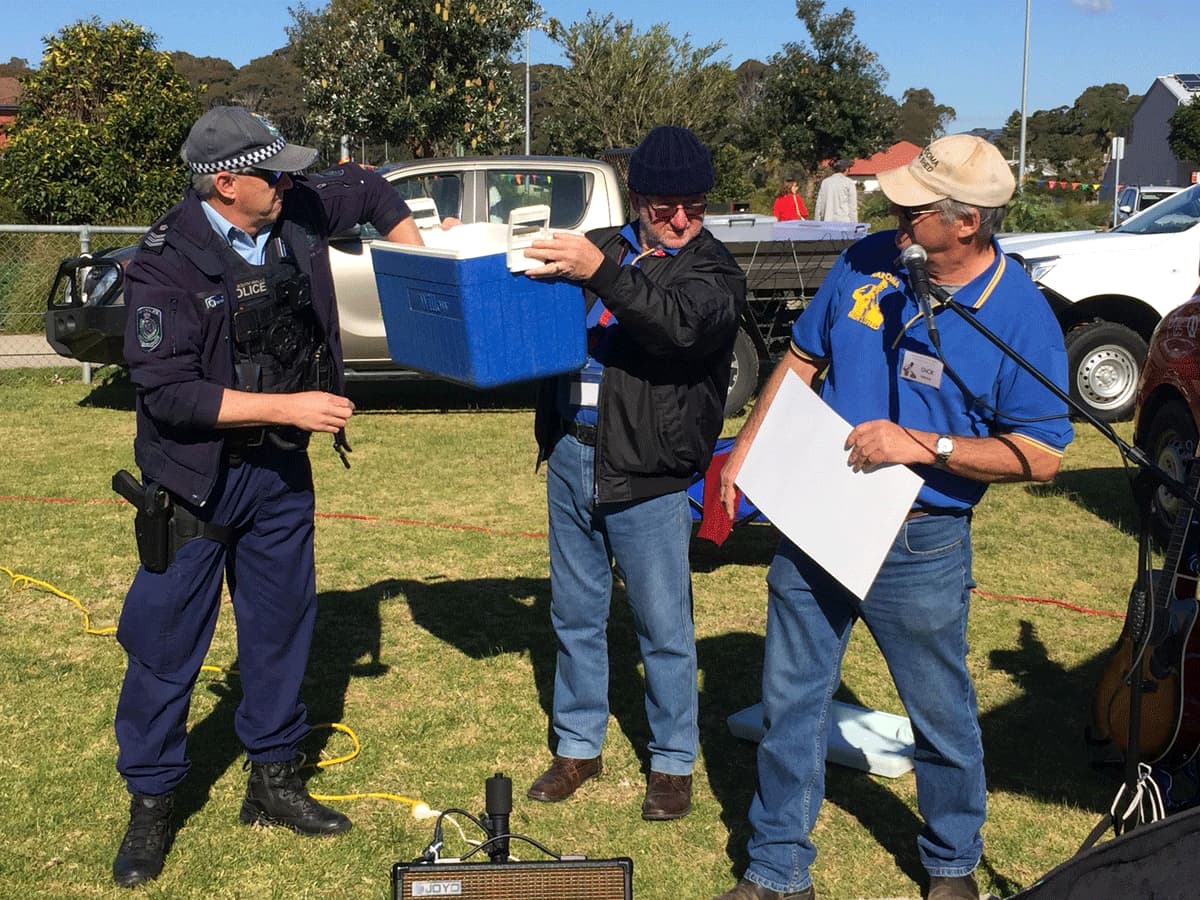 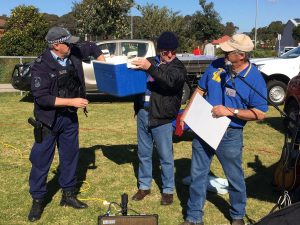 Building Stronger Communities Raffle 2019. A big thank you to our generous sponsors and congratulations to the winners. 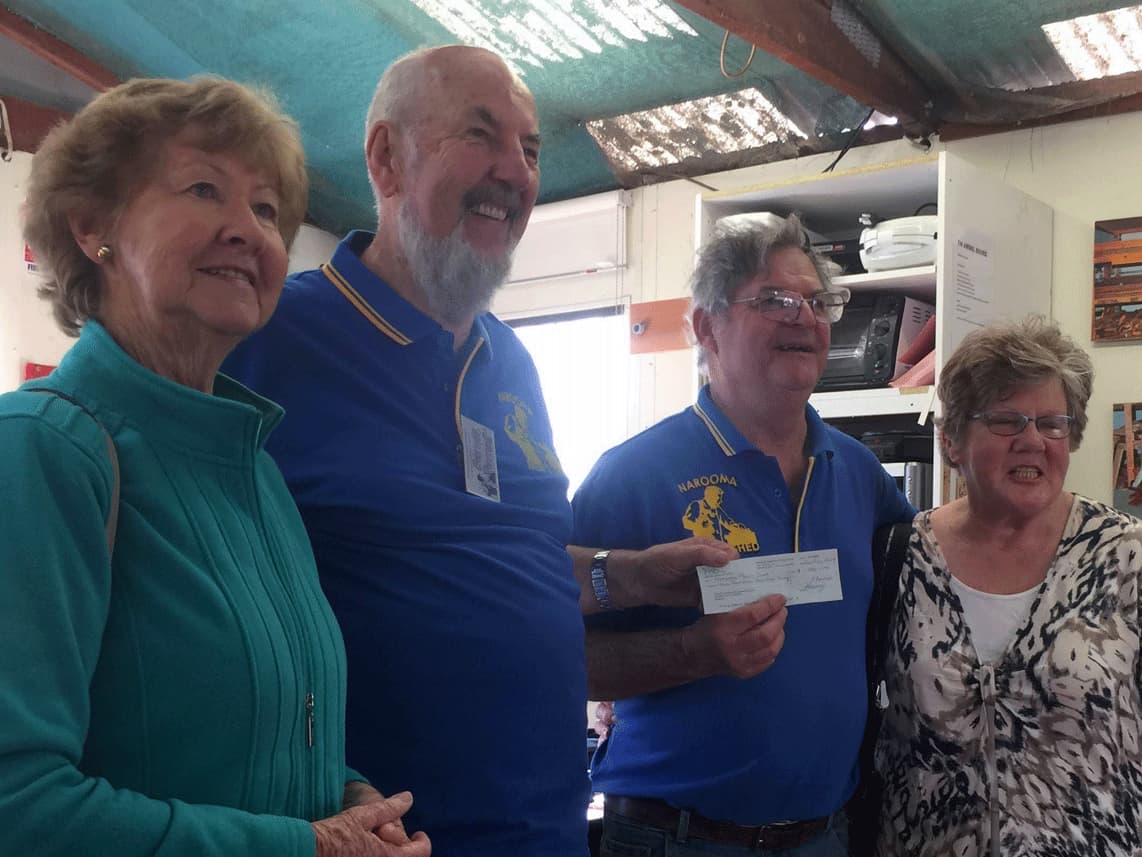 Last week ladies from the Drop In Centre, run by the Uniting Church made a generous donation to the Narooma Men’s Shed to help with the building of the new men’s shed. 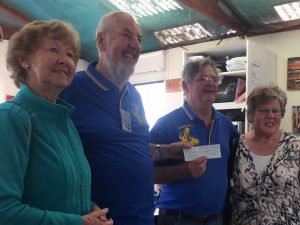 In the photo are: June Hemmingsen (secretary) and Narelle Farmer (treasurer) together with Bernie Perrett (new president) and Dick Nagle (last years president) accepting the cheque.

The Drop In Centre is run by ladies from the  Narooma Uniting Church. They have many volunteers from the community, without whom they could not operate. It is a not for profit shop with all the money raised, after paying our overheads,  going to local charities, as well as some distant ones, for instance Angel Flight. It is also meant to be as it sounds, a place where folk can drop in, have a cuppa and biscuits and a chat.  They rely totally on local donations, and welcome all clean goods except for electrical and furniture. Some of the regular organisations supported are the Moruya Hospital Auxiliary, all the Schools and Fire Stations in our area, Animal Welfare League and Nardy House.  And of course the Mens Shed.

  Send us an email